Discussion and Exhibition
on November 9th 2017 - a retrospect

On 9th November 2017 ARSP hosted an event of exchange and remembrance. We came together with experts from youth work, the church and education initiatives to discuss the possibilities of engaging against discrimination and right-wing extremism. There was also an interview with Solomon Parente as well as a service in remembrance of the November Pogrom.

More than 200 people attended the opening of the “People in Resistance” exhibition organised by the international summer camps in Lithuania, Greece, Italy and Hungary on 9th November which was followed by an interview with Solomon Parente, project partner from Greece. Amongst the crowd were many students of the Neukölln Evangelical School who listened spellbound to Parente’s life story. “A brilliant event with a meaningful exhibition. Our students, as well as the accompanying teachers, were particularly impressed by the interesting and emotional depictions of the memoirs of Mr Solomon Parente” one of the accompanying teachers wrote to us.

At the same time a Fishbowl discussion was taking place with activists who work against right-wing extremism and right-wing populism. “We need to be prepared” said Paulina, “against the ideas that are spreading, and in disastrous ways, on social media and reaching out to so many young people.” Paulina Fröhlich dedicates herself to the initiative ‘kleiner5’, which set itself the goal of keeping the AFD election result below five percent before the federal elections. Right now, after the failure of the elections, work is beginning, says Paulina. They want to use “radical politeness” against right-wing populism and its representatives, and the biggest challenge is to maintain the commitment after the knock-down election result and to win over fellow campaigners.

What Paulina Fröhlich describes as “radical politeness” is what Henning Flad of the Federal Church Association + Right-Wing Extremism calls “civilised contempt”. To take the other side seriously is always important, but just as important is the pointing out of borders, drawing the “red line”, which can become the condition of a conversation with right-wing populists.

Niccolo Romano, project partner of the ARSP summer camps in Sant’Anna and Montemaggio, which was part of the “Be Europe” project this year, emphasises the role of identity formation in the discourse on right-wing populism. Populism is based on signs of deficiency: lack of interpersonal relationships and knowledge, says Nicolo. For this reason he sees good prospects for the work against right-wing extremism and populism in the international summer camps. Bea Spreng, pastor from Joachimsthal, who has, for many years, been engaged against right-wing extremism, sees in the Church a “power of appeasement”, which can create a level of meaningful work against right-wing populism in personal encounters.

Guy Bertrand Dijike from the Corasol initiative, which campaigns for the rights of refugees and against right-wing extremism in Berlin, faces problems in his current work on right-wing extremism and was very worried about this year’s election in France and Germany. The public discourse, which negatively associates everything related to refugees, and the government do not make it easy for Corasol to get support. Society would have an image of African refugees formed by the media and general discourse which is negatively shaped and understands Africa, in general, only as a needy and inferior continent. The solidarity of other comparable organisations is therefore an important pillar of his work, says Djike.

Following the conversation with Solomon Parente and the Fishbowl discussion, a service was held in the memory of the November Pogrom in 1938, which was designed and implemented by the Theology Working Group and formed a thought-provoking conclusion to the event. 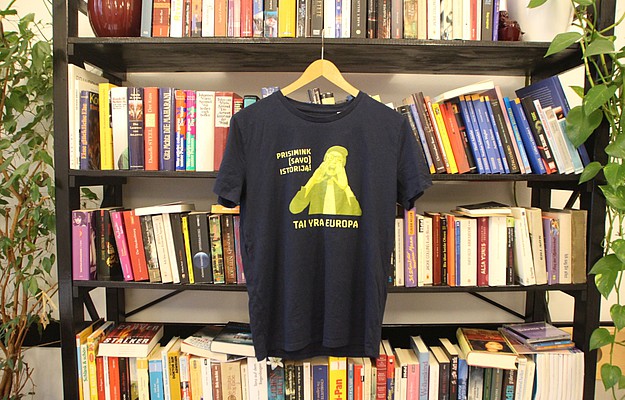 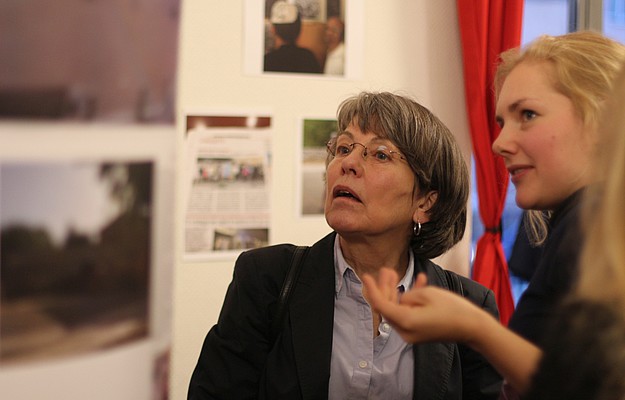 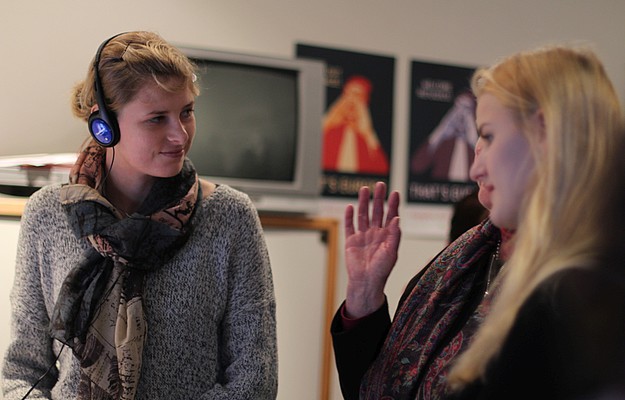 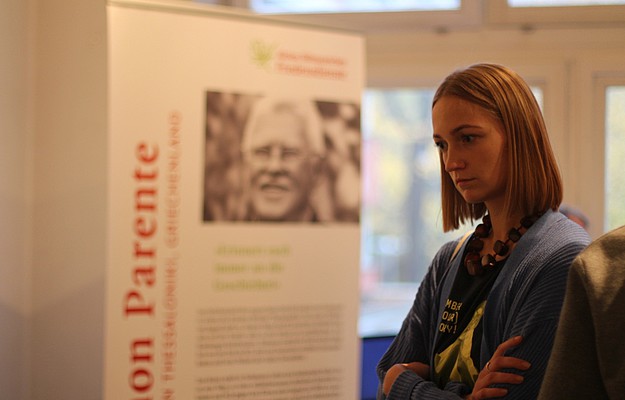 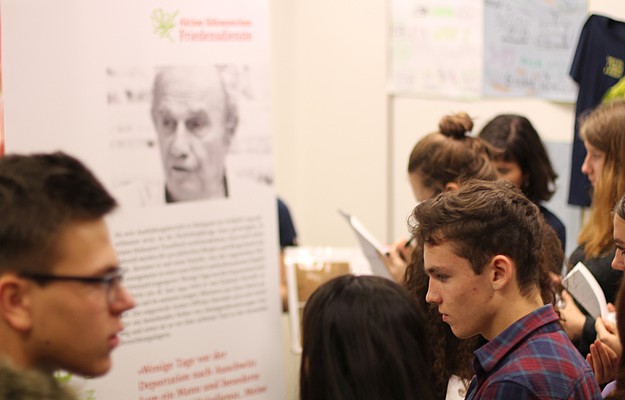 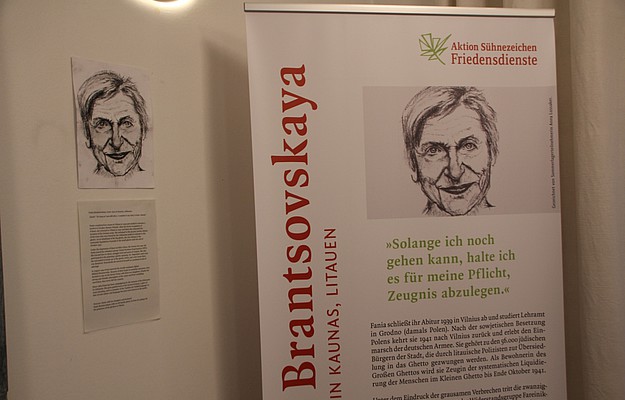 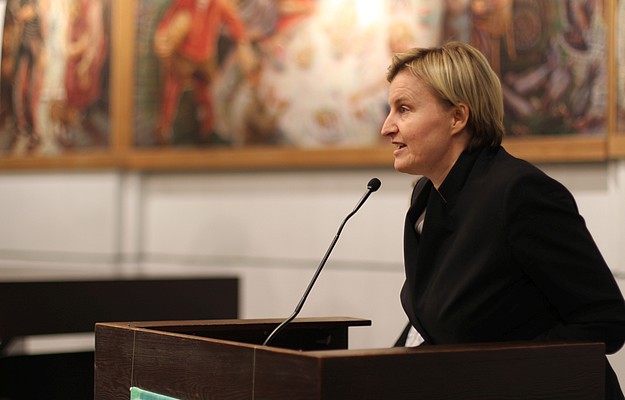 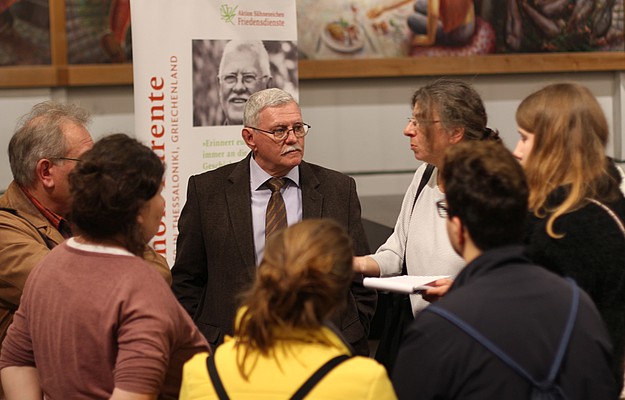 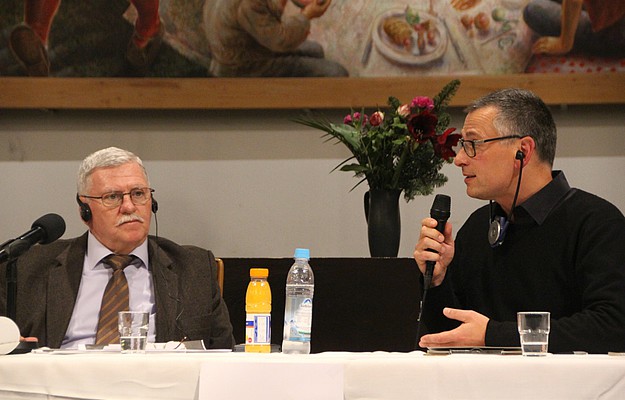 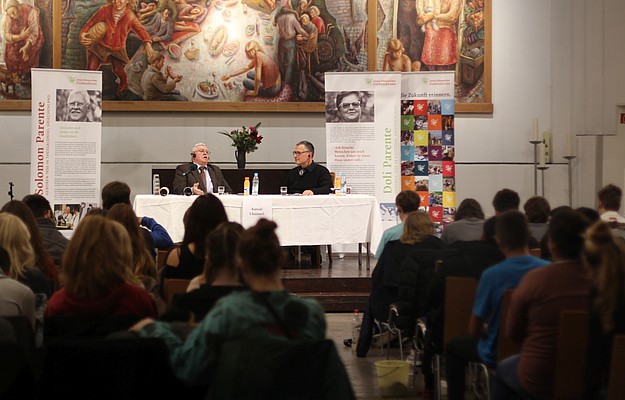 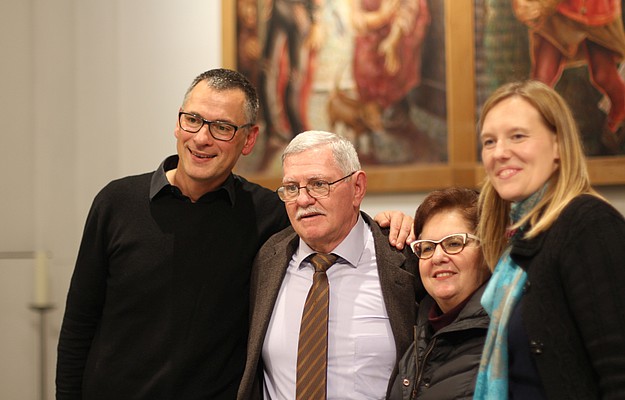 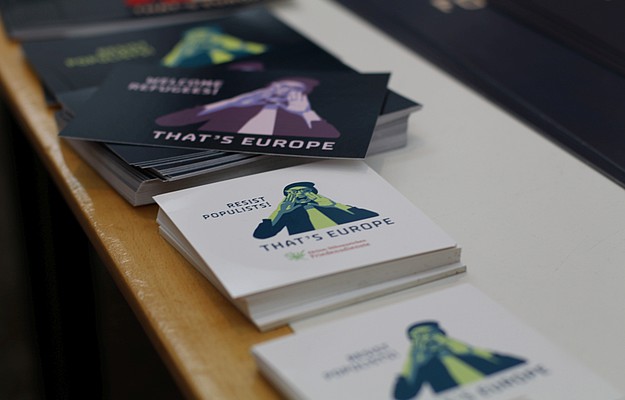 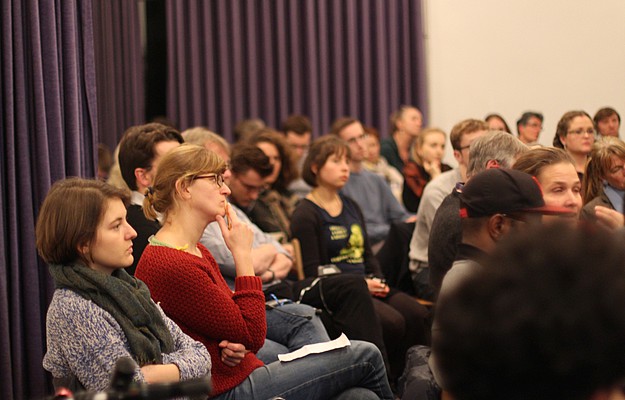 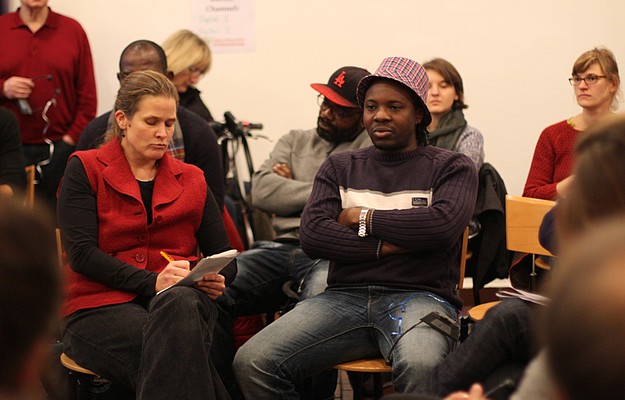 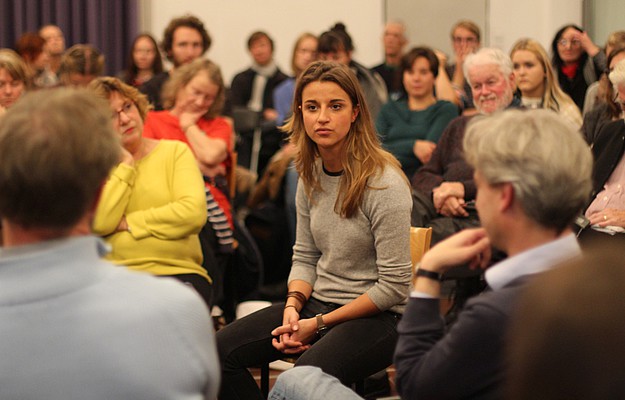 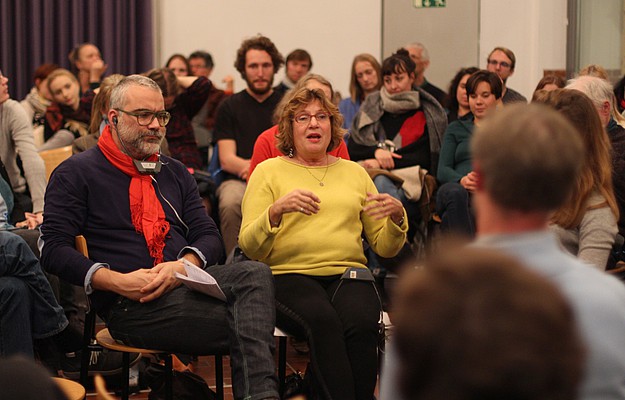 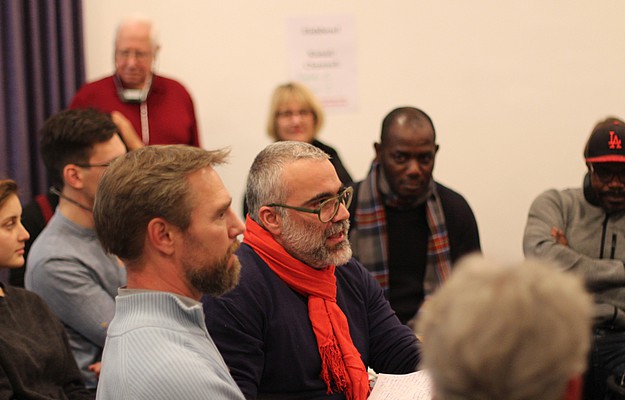 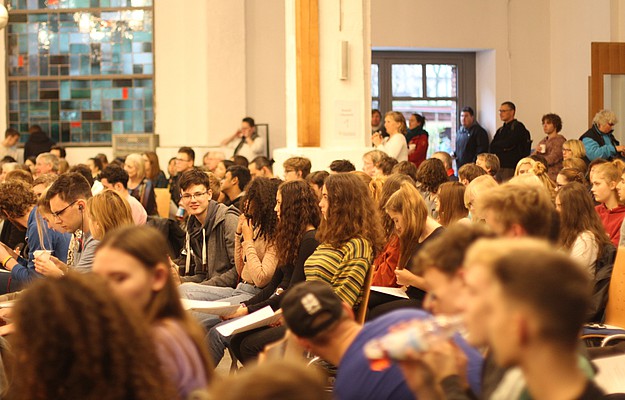 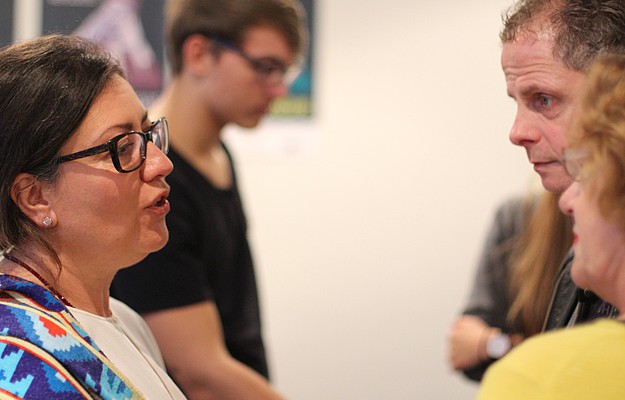 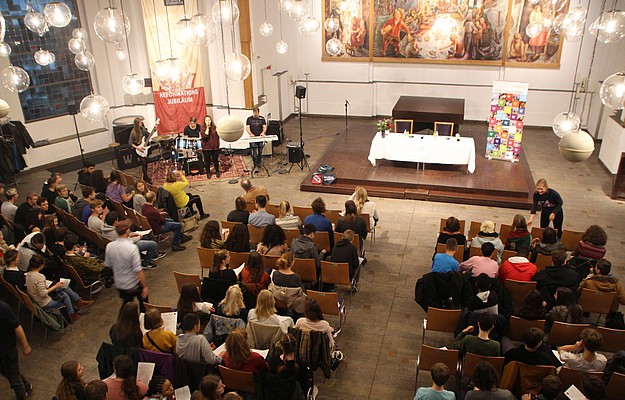 Special Thanks go to the Martin Luther Church Community who generously offered the use of their facilities for this event. Thank you very much for your hospitality!