This year, Action Reconciliation Service for Peace held its third summer camp in Greece. In West Macedonian Greece, we set out on the trail of Jewish life and got to know the people in the village of Kleissoura. We welcome you to a summer camp in the Greek mountains. 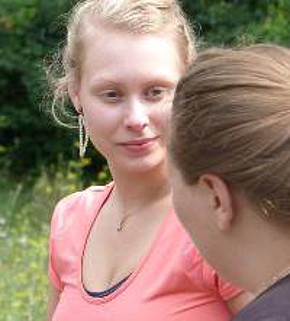 The town of Kastoria is located on a peninsula, almost on the border with Albania. It was alternately under Roman, Byzantine, Greek, Bulgarian and Ottoman rule, until it finally became part of Greece in 1912. Since the 15th century there was a Jewish community in the town. Until the beginning of the 20th century, Christians, Jews and Muslims called this city their home. The emergence of nation states at the beginning of the 20th century, and especially the Nazi occupation from 1941-1944, put an end to this multicultural life.

Volunteers will spend a week in the town of Kastoria, on the trail of the Jewish community which used to live here. A leaflet about Jewish life in Kastoria has already been created by volunteers on a previous summer camp. This year, through practical garden and clearance work, we want to help establish a Jewish museum. We will build our the existing contact with the Dance Club of Greeks of Pontos, and, together with the environmental association Friends of Nature, plant the town of Kastoria's local mountain.

We will spend the other week of our summer camp in the mountains, in the village of Kleissoura. There, we meet the descendants of a massacre, which the SS in 1944 called a “retaliation” against the inhabitants of the small mountain village. The aim is to encounter the people in the village and learn about their lives. With our visit, we want to keep alive the memory of the cruel massacres and bring it back into public awareness in Germany and Greece. We want to continue our conversations with eyewitnesses, deepening the resulting friendships and contacts. By doing renovation work, we want to help to create a place to learn about the history of the village.

The aim of this summer camp is to bring together people of different ages and backgrounds, to learn from the past, and to counteract the one-sided, negative images conveyed in the media of both countries.

The Summer Camp in Kastoria

Registration
Information on Participation in EU projects
Back to Programme