Švenčionys is a small town with less than 5,000 inhabitants and it is situated in eastern Lithuania, bordering with Belarus. According to the written historical sources from the 13th century, the town was always known as a multinational town. Although the majority of the population are Lithuanians (slightly more than half), the town has got big minority groups originated from Poland, Russia, and Belarus. 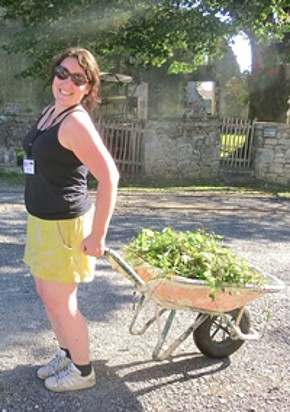 Until the Second World War, the population in Švenčionys town was even more diverse. It is counted that until the brutal war actions around 3,900 Jews had lived in this town. As at that time the total population in Švenčionys was around 9,200 people, it is clear that Jewish community took a significant part in town’s cultural, educational, religious, and social lives. For instance, in the early 20th century there were 5 synagogues in town.

The existing Jewish community nowadays is too small in size and therefore hardly noticeable in public. Perhaps the only artefact existing in town is a remained Jewish cemetery. Švenčionys Jewish cemetery is one of the oldest Jewish cemeteries in Lithuania and has quite an impressive number of unique tombstones. Unfortunately, like many other cemeteries, it is neglected and no regular maintenance is taken place. Very often the cemetery is found vandalised.

The Summer Camp in Švenčionys town aims to prepare the information and material for the inventory process of the cemetery. Ultimately, it could help to understand about the situation of the cemetery as well as people who had been buried there. The inventory process would cover the cleaning and tiding cemetery from debris and access of vegetation; digitisation and identifying coordinates of graves; identifying and copying legible inscriptions.

The thematic work of this summer camp has to do with the Jewish history and culture in Lithuania, as well as the eventful, complex Lithuanian history in the 20th century.  As in all summer camps, the participants are welcome to bring up additional themes that interest them.

In addition to leisure activities being available in the direct surroundings, participants will also have the opportunity to visit the capital city of Vilnius during the program.

The Summer Camp in Švenčionys