I have finished my job at the ARSP film set, the premiere of “Das ist auch meine Geschichte (It is my History too)” is to be held on April 7, 2011 in the Passage Cinema, Neukölln. I hope that many people will like the film and that it will provide food for thought: I, for one, will never forget the impressions during the making of the film, it has been a real life-experience. Many thanks for giving me this opportunity! Or as we say in Norwegian „Tusen takk!“ 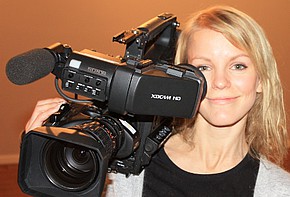 My report about working as assistant for the ARSP Production "Das ist auch meine Geschichte" is the story about my experiences during the film set, and about everything I have learned from the meeting with the Neukölln “community mothers” Stadtteilmüttern aus Neukölln.  I am very proud that the report is available online today!

(I would like to thank Kilian Raiser of the ARSP Office and Kirsten Jöhlinger for their proofreading, both are also doing their voluntary services 2010/2011 in Germany)

Linn Husby, born in 1983, since September 2010 ARSP volunteer in the Germany program. She is working at the ASF PR department and participates in the visiting service of the Jewish Community in Berlin. The voluntary service of Linn Husby is supported by the EVS - European Voluntary Service. 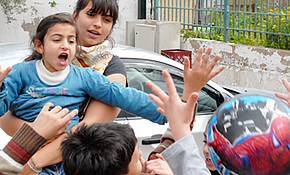 A year of international voluntary service with ARSP abroad? Here you find all the important information, application dates and documents

An international group of volunteers participate each year in a voluntary service in Germany. More information is available here.

Donations: Here you can give ASF a donation