Initiatives for democratic action, music and art projects for young people, renovation work for former forced laborers: The program of the summer camps is as diverse as its participants.

Many of the former concentration camps and work camps where people were imprisoned, tortured and murdered for ethnic, religious or political reasons during the Nazi era have been established as memorial sites today.

Part of our summer camp programme involves engaging in projects to help preserve and develop these historical sites, in particular the smaller, lesser known ones. Maintenance tasks include technical work and renovating, painting doors, weeding and creating memorial paths.

Another important area of work is the archival and historical research that is conducted to document individual experiences in the camps and develop prisoner biographies. This provides volunteers with an opportunity to work with original sources and historical artefacts and helps them to learn about the history of the memorial site. Summer camp participants can also become involved in translating brochures and catalogues into an easy-to-understand language for people with learning disabilities.

The work is accompanied by workshops and excursions related to the areas that participants focus on in their work. This allows the participants to not only look into the history of their own country, but to also have the chance to discuss issues such as right-wing extremism, exclusion, racism and coming to terms with history in an international context with other participants. These discussions are supported by excursions to other memorial sites, concentration camps and religious places. Most volunteers highly value the experience of meeting a survivor. The personal recollections about life in the camp make the site and its history more comprehensible to the participants. 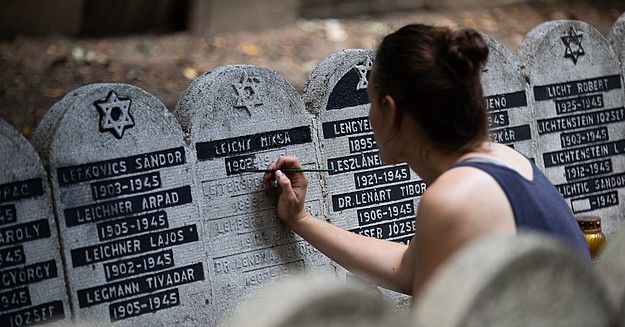 Past and present-day Europe could not be imaginable without the cultural legacy of the Jewish community and the mutual exchange between Jews and non-Jews. The Nazi obsession with race and extermination succeeded in almost completely eradicating Jewish life in Europe. In the summer camps we commemorate the people who were torn from the middle of Europe and we search for traces of European Judaism’s cultural diversity.

Literature, music, art, religion, politics and research: In all areas of life we encounter traces of Jewish culture and creativity in Europe. Almost eighty percent of the Jewish population worldwide has its roots in the countries of Central and Eastern Europe.

With our work in the summer projects we want to support the present, often small, Jewish communities that have been able to preserve their cultural legacy. For this reason the participants often work at Jewish cemeteries, clearing old paths, cleaning gravestones, removing weeds and helping to make the cemetery into a venerable place of remembrance. Jewish cemeteries continue to be vandalized still today. Our efforts against vandalism are an attempt to honour the people who have found a resting place in these graveyards. We also want to help those who are no longer able to care for the grave of their parents or grandparents, either because they were forced to leave the country or were murdered by the Nazis. Both young and older participants take a stance against anti-Semitism and racism.

Our work is not limited to commemoration. We also try to establish a lively exchange between Jewish and non-Jewish participants and project partners. Often groups are able to observe a Sabbath service and engage in intense talks about religion, current Judaism, everyday life, art and music and much more.

Each summer camp is unique. No single programme heading could possible characterize or unify all the areas of work covered by the many diverse programmes offered by ARSP. Many are based on creative ideas for peace and reconciliation work and bring together different fields of work. Hence we invite you to read about the individual programs and summer camps under the general heading “other projects.”