Past and present-day Europe could not be imaginable without the cultural legacy of the Jewish community and the mutual exchange between Jews and non-Jews. The Nazi obsession with race and extermination succeeded in almost completely eradicating Jewish life in Europe. In the summer camps we commemorate the people who were torn from the middle of Europe and we search for traces of European Judaism’s cultural diversity. 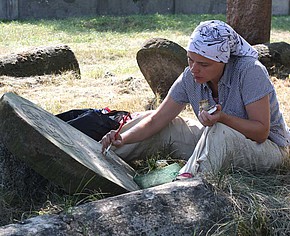 Volunteering in the summer

Literature, music, art, religion, politics and research: In all areas of life we encounter traces of Jewish culture and creativity in Europe. Almost eighty percent of the Jewish population worldwide has its roots in the countries of Central and Eastern Europe.

With our work in the summer projects we want to support the present, often small, Jewish communities that have been able to preserve their cultural legacy. For this reason the participants often work at Jewish cemeteries, clearing old paths, cleaning gravestones, removing weeds and helping to make the cemetery into a venerable place of remembrance. Jewish cemeteries continue to be vandalized still today. Our efforts against vandalism are an attempt to honour the people who have found a resting place in these graveyards. We also want to help those who are no longer able to care for the grave of their parents or grandparents, either because they were forced to leave the country or were murdered by the Nazis. Both young and older participants take a stance against anti-Semitism and racism.

Our work is not limited to commemoration. We also try to establish a lively exchange between Jewish and non-Jewish participants and project partners. Often groups are able to observe a Sabbath service and engage in intense talks about religion, current Judaism, everyday life, art and music and much more.