In Middle Frankconian Bechhofen is one of the largest Jewish cemeteries in southern Germany. Until the late 1930s, Jewish people from all over Middle Franconia were laid to rest here. For hundreds of years, Bechhofen was a spiritually important place for the local Jewish people in Northern Bavaria. 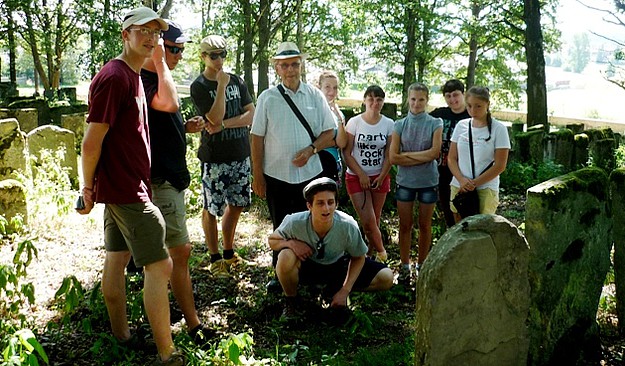 In June 2013, thirteen young people from Belarus, the Ukraine, the USA, Spain, Hungary, and Germany met at a camping place near Bechhofen in order to work together for seven days at the cemetery. Their interest in each other, in the work, and in the topic forged a good atmosphere in the camp. The hard physical work on the hot summer days in the cemetery and the creation of informational flyers were made easier through their cooperation.

The focus of our camp was the long and lively history of Judaism in Middle Franconia, whose end during the time of National Socialism we thematicised through, among other things, excursions to Hesselberg (the site of Julius Streicher’s Days of the Franks) and the city of the Nazi party rallies in Nuremberg. We would have loved to spend a few more days in Krummweiher. We hope to be able to experience the lovely ASF summer camp in Bechhofen again next year, as well. This time we would like to dedicate the so-called Jewish paths, connecting paths between the Jewish rural communities that today are generally unknown.

We would like to thank the state association of the Israeli culture community of Bavaria for their cooperation, Herbert Dommel for his content-related support, and for the materials and tours of the Doris-Wuppermann-Stiftung, and the meeting of Jewish and Christian Bavaria for their financial support.