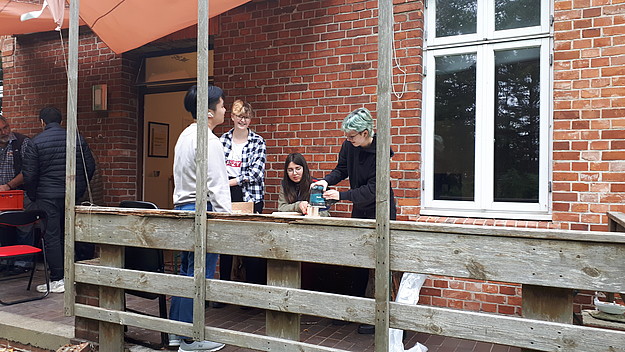 International participants come together to help with the renovation and maintenance of the building at the memorial site in Ahrensbök. The central concern is to draw a bow between the past and the present and to show the topicality of issues such as exclusion and violation of human rights. In addition to the content-related examination of topics from the Nazi era, current political events, and the participants' own biographical experiences, getting to know the three world religions will also play a role.

The Ahrensbök memorial was opened on May 8, 2001 at the historic site, in the only building preserved in Schleswig-Holstein in which an early concentration camp existed in 1933. The house served as a school in 1934 and from 1936 as the administrative building of a factory where forced laborers were employed from 1941 to 1945. In April 1945, a "death march" passed through Ahrensbök. These examples from the region are used to illustrate the beginning, everyday life and end of the National Socialist dictatorship. The memorial sees itself as an extracurricular place of learning that brings history closer to young people in particular through examples from the region.

International participants of the summer camps maintain the outdoor area of the memorial, participate in content-related activities and workshops and visit other memorials and places of remembrance. In addition, time is set aside for leisure excursions. In addition to the content-related examination of topics from the Nazi era, current political events and their own biographical experiences, getting to know the three world religions should also play a role. Another important goal and characteristic of the summer camp is the direct exchange between the young people, which results from the recreational character and the informal atmosphere.