In the western part of the island, which was ravaged by the “Battle of Crete”, lies the Orthodox Academy of Crete (OAC). The Academy “is a symbol of peace and reconciliation, of dialogue and diaconia, of acknowledging the signs of the times, a project of a culture of solidarity and of the social meaning of freedom …” (Bartholomew I., Ecumenical Patriarch of Constantinople, on occasion of OAC’s anniversary 2018) 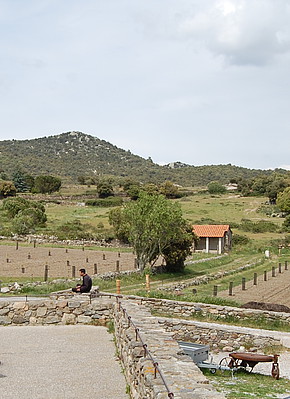 In 1968 OAK was founded by Irinaeus Galanakis, at the time metropolit of Kissamos and Selinon, and his student Dr. Alexandros Papaderos. Their aim: promoting dialogue between people of all confessions and religions as well as between science, culture and faith. OAC is under the auspices of the Ecumenical Patriarchate of Constantinople.

OAC started its work during the times of the military dictatorship, defying the spirit of these times. It is located next to Panagía Odigítria monastery, an area that – like the rest of western Crete – suffered heavily under German occupation. Thousands of civilians fell victim to Germany’s brutal military occupation.

To this day commemoration, exchange and education are important measures of OAC to promote peace. It is one of the most important centers for conferences in Greece. In addition it operates a euro-mediterranean youth centre and an institute for theology and ecology. You can find more information on OAC here: www.oac.gr/en/

We’re glad about  OAC’s invitation to have a German-Greek summer camp. The summer camp group will help with gardening works on the academy grounds and in clearing parts of the buildings.

Thematically the summer camp will focus on Crete’s history, especially the times of the German occupation. We will visit so called martyr villages and speak with time witnesses. We can discuss and experience the influence that history still has on Greek-German relations today. Furthermore we will have the chance to learn more about Greek-Orthodox life.

In 1945 a commission from the Greek government visited Crete to document the atrocities by German and Italian occupators. One of the members of this commission was Greek writer Níkos Kazantzákis.

The „Report oft he Central Commission on the Assessment of Atrocities on Crete” lists 105 towns and villages that became sites of atrocities against civilians. But Crete was also a place of fierce resistance against the occupators, a story that is still very present in the memories of locals. One of the more famous acts of resistance was the kidnapping of German general Kreipe.

The Summer Camp in Crete

Registration
Back to Programme
Information about application
Costs