There have already been six summer camps in Bucharest. Participants stayed at the Moses Rosen House, one of the two Jewish homes for seniors in Romania. Living there, on the outskirts of Bucharest, are 70 older members of the Jewish minority in Romania. They live in a large house with a kosher kitchen, a small synagogue, nurses to care for them, a small park and a cultural programme. Yet they do not have many opportuntites to go out and they have no relatives or pets in their rooms. 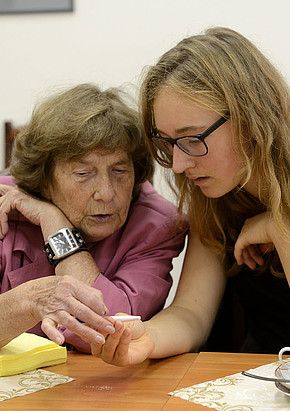 The seniors home belongs to the Jewish community. Today Bucharest’s Jewish communtiy manages the religious, cultural and historical heritage of a minority which was once large and is now small. At the beginning of the 20th century, over 80,000 Jews lived in Bucharest, today there are only 4,000. The community strives to maintain its social cultural and religious life. There are still a few synagogues in Bucharest, and also a Jewish theatre, a school, the Jewish care home, an archive and a few valuable Jewish cemeteries, as well as the remains of the former Jewish quarter. We will get to know some of these during our stay.

The focus of the summer camp is getting to know the Jewish care home in which we will be staying. We will get to know the residents together, ask about their stories, help them in their daily life and organise an afternoon cultural programme. Through spendin time together in the home, we as a group will also have the opportunity to get to know each other, to reflect on our experriences and to enjoy the August evening barbecues and melon, have fun and sometimes travel into the city centre.

Apart from this we will also do maintenance and gardening work on the Jewish cemetery to preserve the place. The Jewish community has also asked us to document who is buried there.

In exchange with those we meet in the care home, the work in the cemetery and by getting to know the Romanian capital city, we hope that we can engage with the history of Jews in Romania and ask how their history is remembered. Work on the effects of the persecution and murder of many Romanian Jews only began a few years ago. The term "forgotten holocaust" was used with reference to Romania for a long time.

The summer camp should give everyone the opportunity to get to know Romania. This will be from a special perspective: by being the guest of a minority in a social institution, by working together at the cemetary, reflecting and creating a leisure programme.

The summer camp in Bucharest

Information about application
Registration
Back to programme
Costs