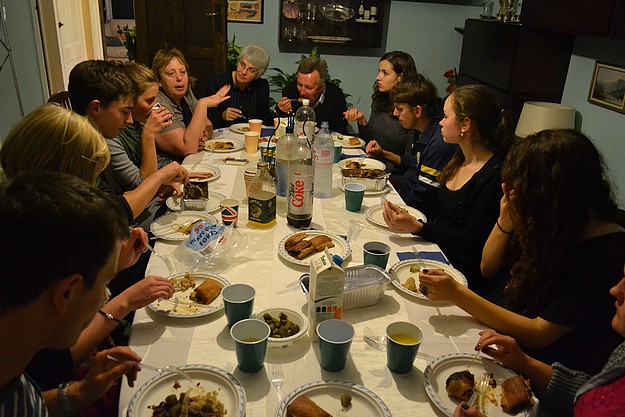 On the 12th October ARSP volunteers took part in a ‘Jewish Awareness Training’ evening in Stanmore, North London. The training was run by Carol Hart, head of volunteer services at the Association of Jewish Refugees (AJR), an organisation providing an extensive range of social and welfare services to Jewish victims of Nazi persecution living in Great Britain.

Eight of our volunteers are currently active within the AJR and the training therefore allowed the other volunteers to gain an insight into some of the work they do and the people they encounter on a daily basis.

The training took place at the AJR office, giving the volunteers a great opportunity to learn more about traditional Jewish habits and religious rituals, particularly as the event took place shortly after the Rosh Hashanah and Sukkot celebrations. Carol also discussed a number of other important themes, including the most important Jewish holidays, how a traditional Jewish household is organised and her views on marriage, life and death.

The volunteers were also treated to a three-course dinner with chicken soup (bean for vegetarians), followed by a number of delicious Jewish specialities and a range of tasty puddings, enthusiastically enjoyed by all!

The evening was a great success, characterised by many thought provoking discussions and exchanges of views and opinions. Our thanks go to Carol Hart for inviting us and providing so much interesting information and wonderful food!