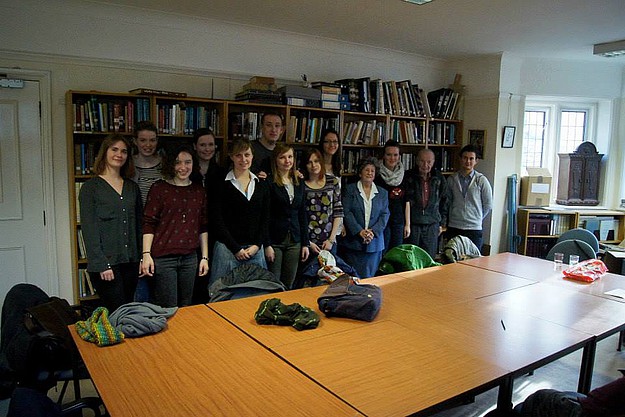 All at ARSP were sad to learn of the death of Herbert Levy, long-time supporter of our work, who recently passed away aged 85…

Herbert, along with his wife Lilian, was one of the most dedicated and committed supporters of ARSP’s work in the UK. For years they provided advice and suggestions on how to improve and further our work, often establishing links to new partners and promoting our work wherever possible. Herbert and Lilian also frequently met with volunteer groups, sharing their personal histories and experiences, an event often described as a highlight of the year by many volunteers. Writing in 2014 former volunteer Dora Köhler reflected that ‘it was very special to meet and listen to Herbert and Lilian and to learn that it was through their work with ASF that they regained some trust to Germany’.

Herbert published a book ‘Voices from the Past’ discussing his experiences of the Kindertransport and came into contact with many ARSP volunteers through his work at the Anne Frank Trust, where he worked as the principle guide of the travelling exhibition and supported volunteers over the course of their voluntary service.

The following obituary was written by Immanuel Bartz, ARSP volunteer at the Anne Frank Trust in 2002/03:

As a nine year old Herbert arrived in London on the Kindertransport and escaped persecution under the national socialist regime in Germany. After the outbreak of war Herbert was classified as an ‘enemy’ alien and interned on the Isle of Man. After the war he met his future wife Lilian, who had lost her parents in Bergen Belsen, and lived with his family in London.

I first met Herbert Levy in 2002 when I started my voluntary service in the UK at the Anne Frank Trust. Herbert had been active as a guide for the Trust’s travelling exhibition ‘A History for Today’ since 1991. Our first encounter took place at his home in North London in the form of an invitation to dinner. We quickly realised that both our families originated from Berlin and that we both shared a great love of theatre. In the years following this first meeting a deep and heartfelt relationship developed. Herbert was a man full of passion, dedication and conviction. He strongly believed that each person is presented with choices and how we respond to these choices presents new ways to live a good and fair life. He worked closely with ARSP for many years, coming into contact with many volunteer generations, an experience he found as enriching as they did. He spoke to volunteer groups about the national socialist past but above all about contemporary instances of racism and the problems relating to them. Herbert wasn’t a man of the past. He was a man of the present and the future. He embodied many of the goals of ARSP, in particularly through his attachment to younger generations, with whom he spent much time throughout his life. In spite of the experiences of his youth Herbert was without prejudice and an open and happy person. His admirable character and forward-thinking attitude to life were a credit to him. Herbert Levy passed away on 7th January 2015, aged 85 years old.

Follow this link to read Immanuel’s obituary in German in ARSP’s magazine Zeichen. The obituary is on page 25:

The Guardian obituary, written by Gillian Walnes, vice-president and co-founder of the Anne Frank Trust, can be found here: